Even if global warming can be kept to a 1.5-degree Celsius rise from pre-industrial times, the Antarctic Peninsula is set for some big changes.

This is the assessment of an expert panel of scientists.

The group says reaching the threshold will likely result in a 50-150% increase in the number of days a year the frozen peninsula spends above zero.

But although this means more melting, the team also stresses the “benefits” that come from not breaching 1.5C.

Keeping below this figure should allow the peninsula to hang on to its remaining ice shelves, they argue.

That’s important because these floating platforms of ice that fringe the long spine of mountainous land work to hold back glaciers, preventing them from dumping more ice into the ocean and raising sea-levels.

Recent decades have seen a dozen or so shelves either disintegrate or lose significant volume, as the peninsula has warmed more than twice as fast as the rest of the planet.

“A 1.5-degree world” increases the likelihood of thinning and iceberg production, according to the panel. However, it’s possible the largest ice shelves can still retain sufficient integrity to avoid further catastrophic failures.

“Under 1.5, we don’t expect ice shelves to be lost – but under more warming they look far more vulnerable with consequences for sea-level and other impacts,” explained Prof Martin Siegert from Imperial College London, UK.

“The ‘benefits’ of 1.5 need to be explained – and we’re trying to explain that while the peninsula is locked into change. It’s still possible to avoid severe problems that would change the peninsula beyond recognition and without historic precedence,” he told BBC News.

Prof Siegert and colleagues from UK and US institutions have written a briefing note that is being presented to an Antarctic Treaty meeting on Tuesday by the British Foreign Office.

It sets out the consequences for the peninsula of a further half-degree rise in global temperature (the world has already warmed by about 1C since 1850). 1.5C is the preferred target to limit warming set out in the Paris climate agreement.

The scientists stress that any rise will almost certainly be amplified in the polar regions.

The extra half a degree globally is likely to translate in the Antarctic Peninsula to an increase of 1-2C in winter and 0.5-1.0C in summer.

According to the panel’s assessment, this is expected to:

increase the amount of rain, snow and ice melt, and surface run-off

accelerate the retreat of coastal glaciers and the production of icebergs 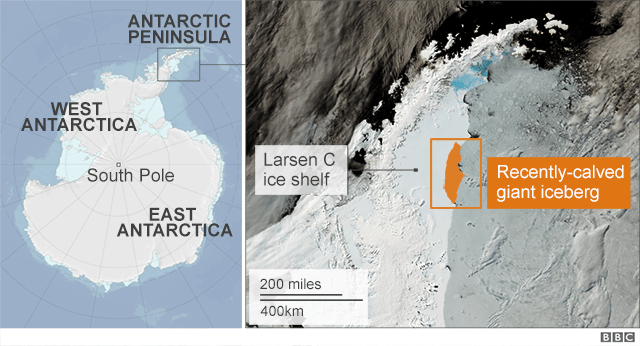 Co-author Prof David Vaughan, the director of science at the British Antarctic Survey, commented: “Local warming in the Antarctic Peninsula over the last few decades has been higher than almost anywhere else in the Southern Hemisphere.

“If similar high levels of local warming occur in the future, magnifying rates of change on the Antarctic Peninsula, then summer melt will move south and ice shelves that have not yet shown any progressive retreat or collapse could be threatened.

“Larsen-C is probably the most vulnerable on the east coast and, if we’re unlucky, could be impacted in the next couple of decades,” he told BBC News.

One mechanism that may mitigate the impact on ice shelves is if ponding meltwater can form efficient rivers that drain across and away from the platforms, rather than filtering down through crevasses.

It’s the downward movement of meltwater that can open up fissures, driving them through to the base of a shelf.

This process, known as hydrofracturing, will weaken the structure. But there are examples where the meltwater finds an easier route to the sea via a network of channels cut in the top of a shelf.