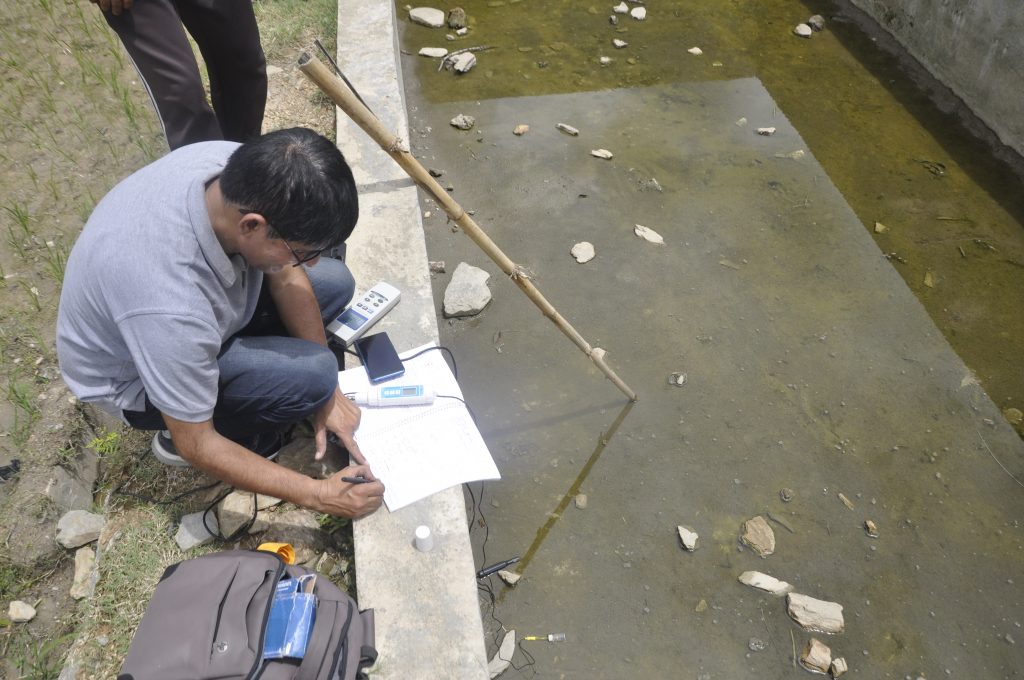 On Tuesday, August 6th in Sindhupalchok, Chautara Sangachok Gadhi municipality-13, Archale Village, Mahadevthan, 16 rhesus macaques died in a pond that was constructed for irrigation purpose by local villagers. The perimeter of the pond is about 12 by 25 feet with almost vertical concrete retaining walls. On August 8th we traveled to Sindhupalchok to investigate this incident and gather the important facts.

We conducted water quality tests and found that the pH of the water was 7.47 and the dissolved oxygen level was 4 ppm (parts per million). Both levels are normal for standing water. Clean stream water that is well oxygenated maintains a maximum level of about 9-10 ppm. We also found frogs swimming in the pond. Because amphibians are very sensitive to toxins in the environment and would have also been killed if there was an electric current. Neither poisons nor electric current could have killed the monkeys and spared the frogs.

We also conducted interviews with locals who witnessed the event Chhetra Bahadur Dulal, age 77, former president of the village development community, noted that he was going to the paddy fields to irrigate on August 6th, when he heard fellow villagers shouting and at the same time heard the monkeys screaming. He went to the pond and found that 25 monkeys had already fallen in and some others appeared intent to also jump into the pond. He said that he and Kusmakhar Dulal chased the monkeys away from the edge and succeeded in rescuing 9 monkeys in the pond by using a long bamboo pole. Again if an electric current had been involved all of the animals in the pond would have died. It was apparent to them that the monkeys tried many times to climb out of the pond but became tired and eventually drowned.

The next day, Dulal returned and saw a lone adult male macaque at the edge of the pond. He was surprised that this male was not aggressive, and the male returned to the forest when he got close. He rescued 3 additional monkeys from the pond that day. All of the monkeys that died were buried on the next day. 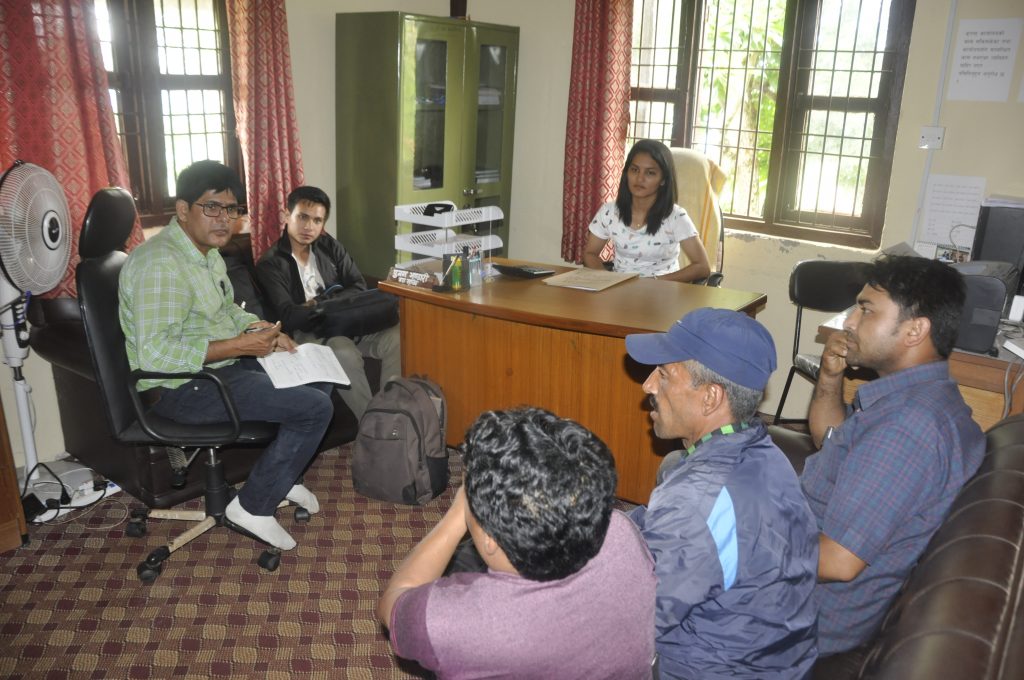 After the incidence many people speculated that the monkeys drank possibly poisonous water or the monkeys had been electrocuted. There was even speculation that the monkeys may have committed suicide. Animals often die from making poor decisions, but unlike humans, no animal species is known to purposely commit suicide. On the day when the monkeys died, it was very hot. The monkeys probably entered the pond to cool off or get a drink of water, not realizing that the walls of the pond were too steep to escape. It was a poor decision, and when the monkeys tried to escape they exhausted themselves. Although other macaques like the Japanese macaque frequently visit ponds they can easily climb out of those ponds because the rock walls are very low, only about 6 inches above the level of the water.

How we researched to travel to the real truth is given below. Light on this is being thrown in some important details.

On the basis of the gathered scientific reasons, we conducted outreach education programs and surveys about the conservation of primates.

We conducted the program at Kunadaladevi Secondary school, Dauthe, which is near the incident area while next was KrishanRatna Ganga Secondary School located in the main town of the municipality.

We also conducted the program in 5 different places of the community in municipality area to gather the information.  All together 200 student, teacher and villagers participated in our program.

In two school, 170 student and teacher while in community 30 villagers participated in our program. Among 200 we put 4 types of questions as,

How are they problematic?

Why it became problematic?

What kind of prevention is being used by the villagers?

What are the solution to mitigate human and monkey conflict?

In the first question,

Monkey are pests because they eat our crops (75%), it used to bite, nail scratch, chasing child/women, slapping (25%)

In the second question, Lack of natural food in forest (30%), deforestation/forest fire (30%), increasing human settlement near the forest (15%), Lack of awareness (10%) and Garbage problem (8%), translocated monkey from different place (7%),

In the third question,

What kind of remedies used by villagers?

In the fourth question,

What are the mitigation methods of Human and monkey conflict?

From questionnaire survey, we want to know whether villagers are using poisons or electricity to kill monkeys? But from their answer this could not be found so we came to the conclusion that electric current and poison was not used to kill the monkey in the pond.

This incident in Sindhupalchok reminds us that we humans must take many things into consideration when we alter the natural environment. What if a simple ladder had been installed on the pond wall? Monkeys are smart, would have figured out how to use the ladder, and would have climbed out. It is here that I will end with one final thought. What if it had been a young child that had fallen into the pond? If a monkey could not climb out you can guess what the fate of the child would have been, and we would be having an entirely different discussion. 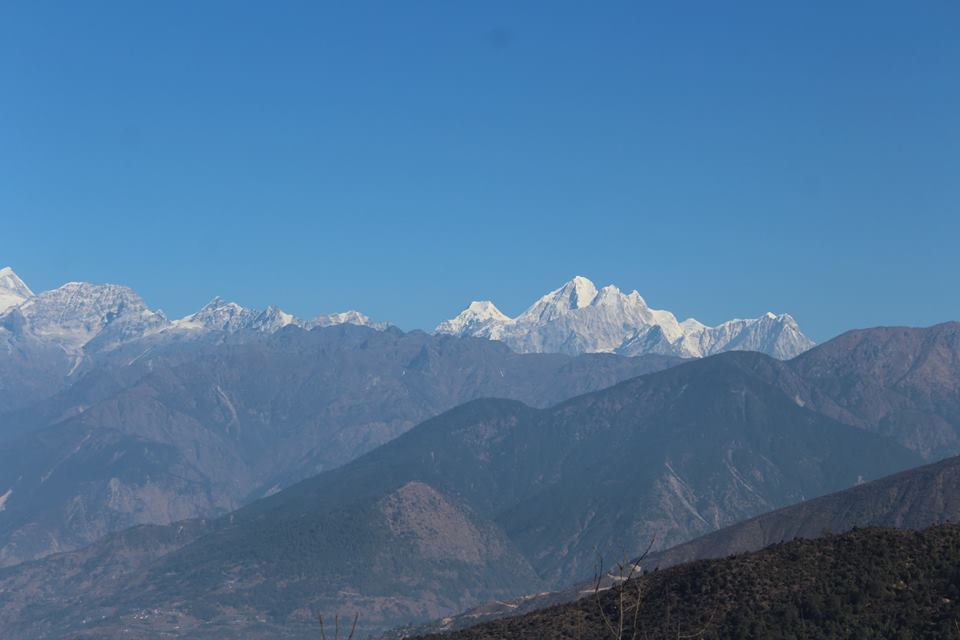 Climate Change, the challenge to “Protect Our Species” 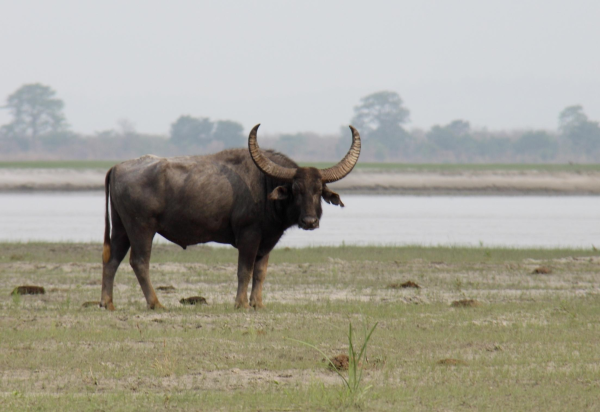