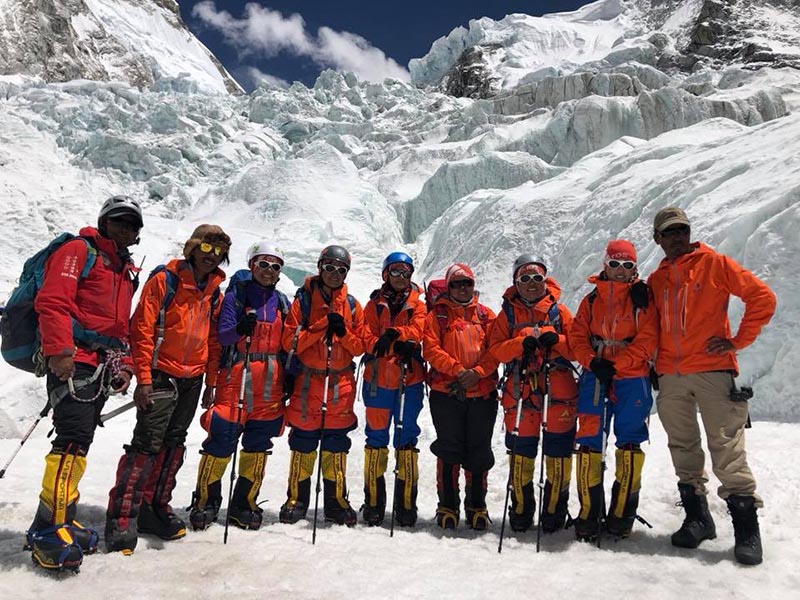 A team of women journalists successfully climbed Mt Everest this morning, according to base camp officials.

“The First Women Journalists Everest Expedition-2018 made it to the top of Mt Everest at around 6:00am,” liaison officer Gyanendra Shrestha told  from the base camp. Four young women journalists involved in different facets of country’s journalism have also become the first team of journalists to script a history by successfully scaling the world’s highest peak.

Rosha Basnet of Rastriya Samachar Samiti, Kalpana Maharjan of Mega Television , Rojita Buddhacharya of Nepal Television and Deuralee Chamling, a freelancer, scaled the mountain as their team was guided by renowned climber Phurba Tenjing Sherpa of Dreamers’ Destination Pvt. Ltd, Shrestha further added. “They also attempted to live stream their Mt Everest climb, all the way to the summit point from the base camp.”

Another member Priya Laxmi Karki of News 24 Television, however, abandoned her bid after reaching Camp III,  he added.

The team members have been descending to the lower camps safely, according to Shrestha.

FWJEE-2018 team scaled Mt Everest under the banner of the Federation of Nepali Journalists with a slogan ‘Unified Voice for Equity’. The team had also conducted an intensive mountaineering training in Dolakha to prepare for their spring expedition on Mt Everest, according to Shrestha. “They had climbed Mt Ramdung (5,925 m) and Mt Yalung-Ri (5,630 m) in the Rolwaling Valley,” he added.