Red Panda is a red cat bear, which is called Habre in Nepali. It is a Himalayan member of Carnivora which is scientifically named as Ailurus fulgens and also called lesser panda. It is an (endangered A2cde+3cde+4cde ver 3.1) species mentioned in Red List category and listed in Appendix I of CITES. It is also protected species in Nepal, India, China, Bhutan and Myanmar.

It loves to feed highly fibrous bamboo (Kong et al., 2014) though it ingests some other kinds of plants, such as fruits or berries, as their seasonal supplement (Fuwen and Zhang, 2010a). So, bamboo presence and cover is essential habitat feature for Red Panda (Sharma et al., 2011).

Global population of Red Panda is estimated about 16,000-20,000 based on lowest recorded average density and total area of potential habitat (Choudhury, 2001). Its population is declining due to low fecundity, high infant mortality rate (Yonzon and Hunter, 1991b), parasitic infection (Zhang et al., 2008), population isolation, bamboo flowering (Fuwenand Zhang, 2010b) and above mentioned anthropogenic threats (Glatson, et al., 2015). Therefore, conservation of Red Panda is the must and urgent.

Around 22,400 km2 of Nepal is predicted as suitable habitat for Red Panda which is 56.25 percent of potential Red Panda habitat in Hindukush Himalaya. LNP (Langtang National Park) is one of the prime habitat of Red Panda. LNPBZ (Langtang National Park Buffer Zone) which is listed in IUCN Category VI covers area of 418.3 km2 adjoining Nuwakot, Rasuwa and Sindhupalchok districts of Nepal.

There are altogether 21 User Groups of LNPBZ. Indreni Buffer Zone Users Group is also one of them. Thirty (10 percent of 305) households of this user group were sampled purposively and surveyed by Chandra Gurung Conservation Foundation in 2016 to assess their perception on biodiversity conservation, LNP, LNPBZ and Red Panda since perception of buffer zone community is crucial for biodiversity conservation specially that of endangered species. 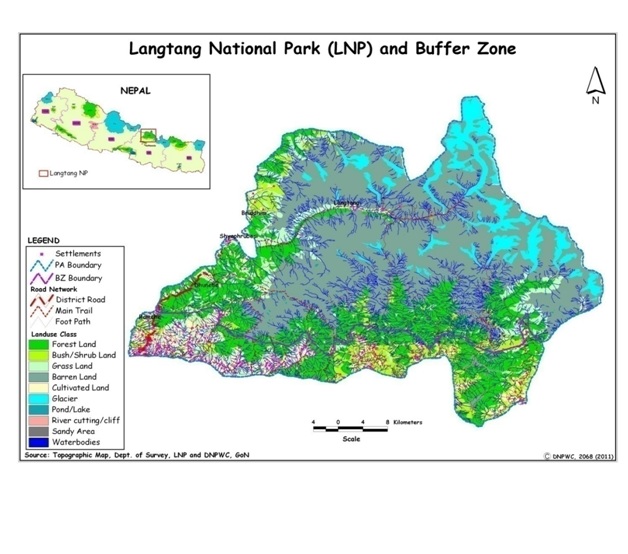